A HISTORY OF CRYSTAL HEALING 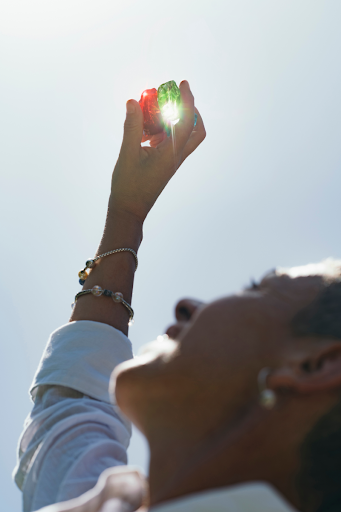 Crystal healing is defined by Oxford Languages as the use of crystals for therapeutic purposes in alternative medicine.  For millennia crystals have been used to both heal and bring balance through resonance and vibrations.  Study and training are important when working with crystals because there is much we still don’t know but you can start with common alignments and first-aid.  Some crystals contain minerals that have known therapeutic properties.  There is so much still to learn about Crystal Healing and the beauty of it becoming more mainstream is that more and more information is readily available for study.  Since there is so much that we could talk about on this subject, I’m going to do a similar breakdown to Astrology and ask the following: When was it first recorded?  What is the purpose? How did it evolve? What does it look like today?  Where can I learn more?  These are the questions I will answer in this piece based on the information that we currently have.  As with most knowledge, much of this originally was passed down through oral histories making the roots or “origin” hard to determine with specificity but we’re going to give it a shot.

One of the early mentions of Crystal Healing comes from Plato and his account of Atlantis.  According to Plato, the Atlanteans used crystals to read minds and transmit thoughts.  I definitely could be convinced that Atlantis was real.  The first historical documentation of crystals originated from the Ancient Sumerians (c. 4500 to c. 2000 BC). The Sumerians used crystals in their magical formulas.  Writings have been found dating back as far as 400 BC that make observations about the powers different crystals were believed to emit. People would wear amulets or other talismans with specific stones in an attempt to counteract the negative effects of a negative incident that occurred.  The origins of crystal healing are tied to Ancient Egypt and Mesopotamia, India, Ancient Greece, or Ancient Rome. Ancient Egyptians mined for crystals and used them to make jewelry. They used crystals as aids for health and protection.  The Ancient Greeks assigned a multitude of properties to crystals. The word ‘crystal’ is derived from the Greek word “krýstallos” which translates to “ice”.  The Ancient Greeks believed that clear quartz crystals were water that had frozen to the point where it would remain in its solid form.  The belief and uses and practices for crystals vary across cultures and time periods.  Native American culture and crystal healing have been passed down through generations through word of mouth, due to this many traditions and secrets have been lost due to the extinction of many indigenous people and languages.

Crystal healing is a type of alternative therapy that involves using gemstones to bring balance to an individual’s life and mind. Judy Hall, the author of The Little Books of Crystals, wrote that crystals are said to “have a stable and unchanging energy pattern, each with a unique frequency and energy field, or resonance” that gives them special properties. As a result, “they act like tuning forks,” helping bring “harmony to the very unstable energy field of the human body”.  The healing benefits of crystals predominantly align in the areas of mental wellbeing; including feelings of increased tranquility, positivity, and focus, as well as enhanced immunity and pain relief.  Crystals are also known to have their own special energies that align to different areas of your life, with their shape and color – as well as their type – affecting their influence.  Everything around us is energy.  From what I have read it seems that crystals act as the tuning key to tap into different energies and healing frequencies.  Crystals help us focus and tune into our specific inner powers.

The New Age Spiritual movement of the 1970s is heavily associated with the current crystal healing that we see today.  Crystal healing today is often featured in jewelry and is used side by side with yoga, meditation, or mindfulness.  Many folks turns to crystal healing when they become dissatisfied with modern medicine and people are looking to revive cultural traditions from older generations. Today brands like Smudge Wellness, Standard Dose, and more are helping to make crystals more accessible for everyone and providing education on how to identify and utilize them.  You will find different meanings for different stones depending on where you look and I look at that as an opportunity to imbue your stone with what you want and need.

Today Crystals and Crystal healing are on the rise, becoming increasingly popular.  It’s probably a combination of people returning to nature and the rising costs of medicine, especially in America.  Today we are seeing more and more people growing their spiritual wellness practices and seeking to learn a different way.  More and more people are realizing that we have the power to heal ourselves with the proper tools like Crystals.  There are many ways to work with crystals.  Some crystals’ frequencies directly correlate to certain chakras, making crystal healing an extremely useful healing method.  A common practice after choosing your individual crystal is to decide what it is you want the crystal to aid or promote you in. Hold the crystal in your hand and meditate, focusing on your goal, silently repeating a mantra that connects to your goal.  Crystals also require care like some require cleansing or charging.  Crystal healing is a practice that relies on intuition as its medicine. Whether you are being guided by a spiritual healer or you are healing at home, there is no right or wrong for the abundant healing properties of a crystal.   Crystals can work to ground and balance, restore and energize, and purify and cleanse both the mind and body.  There are many tools to support the crystal education that you can find on The Dirt.

Crystals are something we LOVE to talk about here on the Dirt.  There are also a lot of really great books about crystals that you can read if you want to dig into them more.  You can also spend time meditating with the stones that speak to you and ask how you can use them.  I’m a big believer that whatever you believe is true so take time with your stone and do your own research and see how stones create new magic in your life.

Crystal Healing Practices in the Western World and Beyond

I Tried Crystal Healing for Stress. Here’s What Happened
I’m a Third-Generation Witch and This Is How I Use Healing Crystals

The Benefits Of Crystal Healing

The Crystal Bible by Judy Hall

The Little Book of Crystals by Judy Hall