A HISTORY OF TAROT 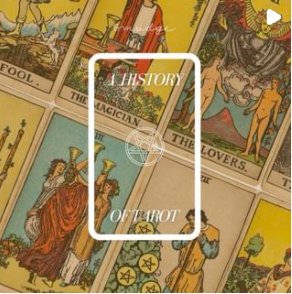 Tarot is a practice with cards, traditionally a pack of 78 with five suits, used for fortune-telling, especially in Europe, in certain games. The suits are typically swords, cups, coins or pentacles, batons or wands, and a suit of trump.  It started as a popular game and didn’t evolve into what we see today until later.  Tarot is a tool for self divination and meditation, an art form, and a card game.  The cards contain archetypes, symbols, and imagery to convey human emotions, challenges, and circumstances. The individual can interpret these cards and relate them to their own life as a sort of meditation and reflection or read them for others utilizing their intuition.

Tarot is an old practice that is definitely growing into the mainstream in a lot of ways but it has been popular throughout history.  As with the last two histories, there is so much that we could talk about on this subject so here’s how I want to break it down.  For this history I asked the following: When was it first recorded?  What is the purpose? How did it evolve? What does it look like today?  Where can I learn more?  These are the questions I will answer in this piece based on the information that we currently have.  We are constantly making new discoveries and I imagine much of this originally was passed down through oral histories making the roots or “origin” hard to determine with specificity.

Scholarly research has demonstrated that tarot cards were invented in northern Italy in the fifteenth century and confirmed that there is no historical evidence of the usage of tarot for divination until the late eighteenth century.  The term tarot derives from tarocchi, an Italian word whose root—taroch—translates to “foolishness.”  The word taroch was used in the fifteenth century, when trionfi, a 70-card game inspired by the theatrical festivals popular during the Italian Renaissance known as trionfo emerged.  Trionfi cards typically featured gilded decorations and hand-painted illustrations of personified and allegorical motifs. In the sixteenth century, “the fool” joined this cast of characters, and trionfi game became known as tarocho in Italy and taraux—a term that eventually evolved into tarot—in France.  It is unclear where tarot actually originated, just that this is the earliest documentation of it that we have found so far.

In both France and Italy, the original purpose of Tarot was as a parlor game, not as a divinatory tool. It appears that divination with playing cards started to become popular in the late sixteenth and early seventeenth century, although at that time, it was far more simple than the way we use Tarot today.  By the eighteenth century, however, people were beginning to assign specific meanings to each card, and even offer suggestions as to how they could be laid out for divinatory purposes.

According to a manuscript written by an unknown source in 1750, the 62-card Tarocco Bolognese from the 15th-century was among the first decks to be used as a means of fortune-telling. By the 1780s, people in France were assigning divine meanings to their decks as well, predominantly with the Tarot of Marseilles, then the country’s most popular playing cards.  This movement was led by French occultist Jean-Baptiste Alliette, or Etteilla, whose book Etteilla, ou manière de se récréer avec un jeu de cartes (“Etteilla, or a Way to Entertain Yourself With a Deck of Cards”) unreliably linked the tarot to ancient Egyptian texts.  In 1789, Alliette produced a new deck of tarot cards intended solely for supernatural use. This deck comprises 78 cards organized into two categories: the Major Arcana and the Minor Arcana.

The Major Arcana features 22 cards, each denoting an allegorical figure (The Magician, The High Priestess, The Empress, The Emperor, The Hierophant or Pope, The Hermit, The Hanged Man, The Lovers, The Devil, and The Fool) or personification of an object (The Wheel of Fortune, The Chariot, The Tower, The Star, The Moon, The Sun, and The World) or abstract concept (Strength, Justice, Judgment, Temperance, and Death). These cards are believed to hold the big secrets of spiritual self-awareness.

The Major Arcana features four suits (the Suit of Swords, the Suit of Batons, the Suit of Coins, and the Suit of Cups) of 14 cards each. Each suit, in turn, comprises ten numbered cards and four court cards: the King, Queen, Knight, and Jack. These cards are believed to hold the small secrets of everyday life.  By the turn of the 20th century, tarot cards were so entwined with the occult that a deck used solely for playing rather than predicting was created.

Because the earliest tarot cards were hand-painted, the number of the decks produced is thought to have been small. It was only after the invention of the printing press that mass production of cards became possible.

As Tarot has changed to adapt to our changing and progressing society, many decks have been created to include those who were maybe left out or overlooked in “traditional decks,” like people of colour or from non-European cultures.   In a recent surge in popularity of witchcraft in pop culture, tools like crystals, incense, and Tarot cards have become very popular and profitable.  Makers and brands have taken this opportunity to publish many decks with pop culture themes and figures.

Smudge will be posting more Tarot content each month for us to grow and learn together.  Definitely check out the Dirt and utilize it as a resource for growing your knowledge and practice.  Follow professional readers like Tirrell Cherry (who has done some great card education on Smudge’s Youtube Channel) or Me, Morgan or the many other dope readers that practice and share on and offline.  Most decks come with a book connecting you to the themes and messages of that deck.  There are a lot of great books on Tarot that you can check out to dive deeper into your practice.  If you want a more personalized touch, find an online class to get a deeper understanding of your practice and yourself.  As this area continues to grow and increase in popularity, there will continue to be more information and resources that are developed to help us understand.  I am excited to see what we learn together.

A Brief History of Tarot

A Brief History of Tarot Cards by Bicycle Cards

The Spellbinding History of Tarot Cards, From a Mainstream Card Game to a Magical Ritual

What are the Origins of Tarot?

Where do Tarot Cards come from