HOW I MAKE SPIRITUAL WELLNESS A FAMILY AFFAIR 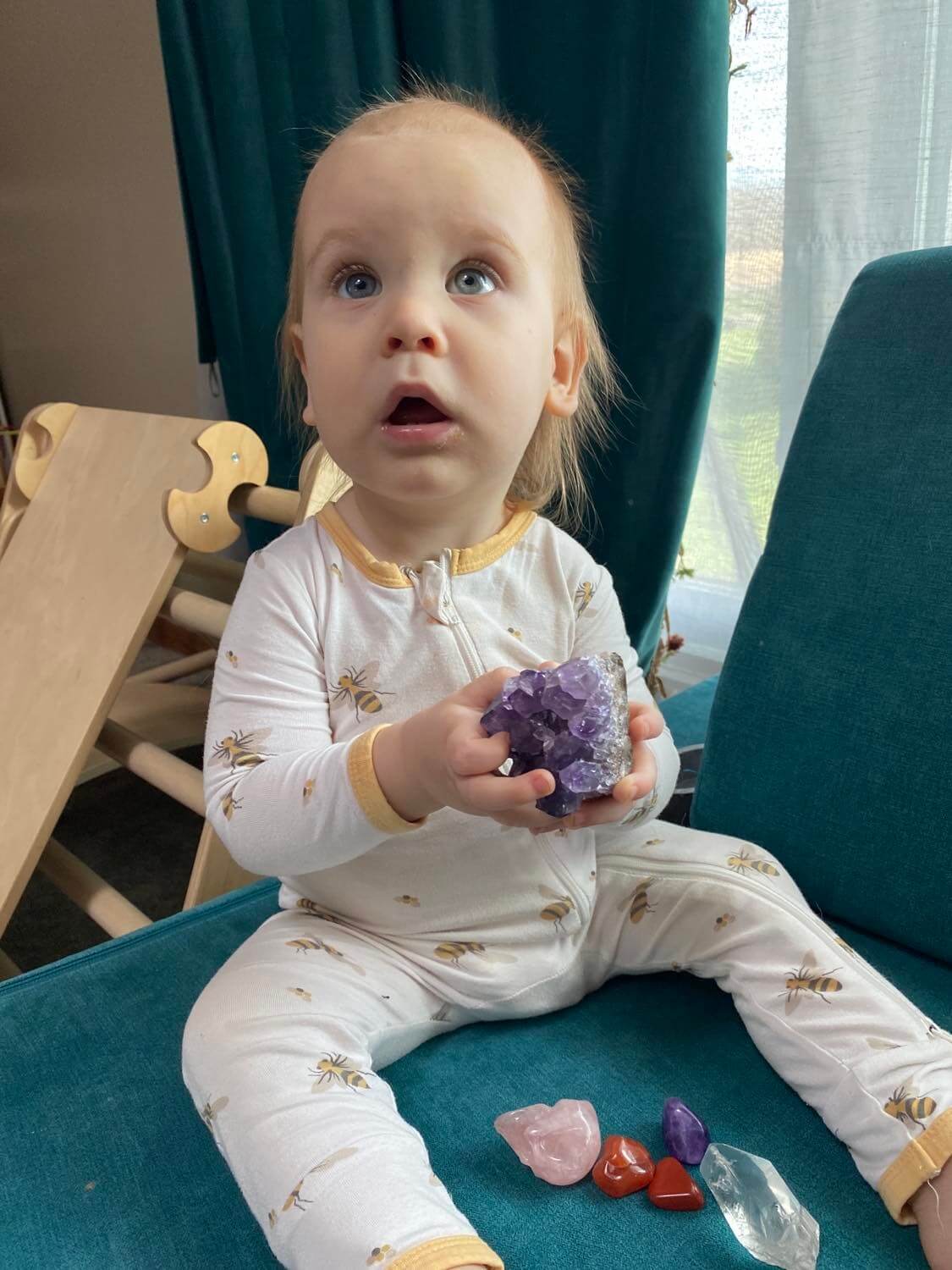 How young is too young to bring a child (in my case, grandchildren) into a spiritual wellness practice? I honestly started talking with my almost three-and-a-half-year-old grandson, Atlas, about my crystals and oracle cards about a year ago when he woke up early one morning and asked what I was doing. How I make spiritual wellness a family affair is something I planned before I jumped into the role of Gigi to my grandbabies.

I had my cards by my side and some crystals and a candle on the table, my tea and my journal. He climbed into my lap and grabbed the card from my Oracles of the Fairies deck. The cards on the table were New Beginnings and Purity. New Beginnings has a fairy looking over a baby who is sleeping in a basket. Purity has a fairy standing with a unicorn who is holding a glowing lantern in his mouth.

I explained that New Beginnings could be something really big or it could just be the day that was just starting out for us. He was fascinated by the baby and wanted to know about her (Atlas decided the baby was a girl). I made up a story about her life, how every day is a new beginning. How even if we are having a bad time, like throwing a tantrum (lol) that once he’s calmed down, it was a new beginning. He liked the idea that “even if I get mad I’ll get glad again.” My heart melted and I told him, yes.

For Purity, he wanted to know how they got the horn on the horse and that lead to a discussion about magic and imagination. I explained that purity meant to try and have his heart be as friendly as possible. It’s not easy to explain the concept of purity to a toddler.

How I Make Spiritual Wellness A Family Affair

Then he pulled the two crystals toward him. My Smudge Wellness Opportunity pack of crystals contains a Tiger’s Eye that has what looks like a heart design. Atlas said hearts are love, which they are. I also told him that Tiger’s Eye is about being fearless and brave, like a tiger. That set off a bout of running around the room roaring — thankfully my husband and Atlas’s brother, Apollo are heavy sleepers.

The second crystal I had pulled that day was, Green Adventurine. Atlas was excited because it is “Gigi’s favorite color forever!” and it is. I explained it is a lucky stone and can bring friends, family and even money. Since he is saving money for a vacation that made him pretty happy. He kept rubbing his fingers across the smooth surfaces of the stones and I was surprised when he said, “this is smooth and quiet.” It was.

He found a piece of pyrite and thought I was saying pirate and because he thought it was a piece of gold he was off being a pirate. Atlas likes to look at my various decks of cards and sometimes before bedtime, he will want me to “read a card story” so he gets the box of cards that suit his fancy, we spread them out and he chooses up to five cards. I tell him the story written on the cards then he wants me to tell a “real” story — in other words one we make up together. We do a lot of “and then” stories before bedtime. Sometimes the “and thens” are all about Atlas getting a new toy, other times the “and thens” are about Atlas making a new friend, or being mad at his brother but then not being mad. It’s interesting to see where his mind goes.

Will he remember these moments with me, the cards and crystals? I think he will because on those Sunday mornings when he wakes up as early as I do, we have our card and crystal ritual. Some mornings we go into his tent and he turns on his Spiderman flashlight and we look at the cards and crystals. He wanted a notebook so he could “write down the stuff like Gigi does” and he grabs a crayon and scribbled in his notebook then reads me what he’s written.

One morning he asked, “why do you do all this stuff, Gigi?” I told him it’s because I like to start my morning quiet — no tv or radio. I like to think about what the new day might bring and I also look back at the cards I drew the day before and compare notes from what I thought it might be to what it turned out to be.

Last week when I wasn’t home, he wanted to video chat because he’d found a rock in his driveway the night before and stuck it under his pillow. He said it wasn’t pretty but it was soft and smooth and he was going to have a heart-y (he likes to say he “hearts” us and hold his hands like a heart on his chest) day and be nice to his little brother. He did add the disclaimer, “for a while” but we take what we can get.

My other grandson, Apollo, is a year and a half old. At this point, we have quiet times together when he wakes up from a nap. He is slow to wake and we snuggle in the rocking chair in the light from the salt lamp on his dresser. I give him one of the crystals I carry in my pocket and he seems mesmerized by the colors or perhaps the shape or weight of it. After a few minutes, he tosses the crystal on the floor, slides off my lap and heads for the door.

My husband appreciates and supports my crystals, cards and spiritual practices but doesn’t participate. Our daughter (our grandson’s mom) always carries a crystal or two in her pocket. She usually carries rose quartz and black tourmaline to help her calm herself and not overthink as she is wont to do. I asked her and she said she doesn’t truly “practice” anything with them but she does place them on the window sill in the moonlight to recharge them and said on the days she doesn’t have the comforting weight of them in her pocket when she needs to rub one, she feels anxious and out of sorts.

My tips for making spiritual wellness a family affair:

My introduction to the power of spiritual wellness, the tarot, crystals and oracle cards came to me later in life. It started ten years ago when I was diagnosed with breast cancer. I didn’t have a deep faith upon which to draw from. At a visit with my medical oncologist, I told her “I can’t face all of this. It’s too much. It’s too scary. It’s too much unknown.” She told me to take everything in ten-minute increments. Only think that far ahead.

“Anyone can handle ten minutes, right?” she asked. She also mentioned meditation (which I still cannot still my mind enough to do) and finding a routine to help with my stress and fear of the unknown. She then mentioned how she relaxed with yoga and crystals — her crystal comment set me on a path to discover more. Here I am ten years later (almost to the day) and I am spiritually and physically well. And now I can offer my grandbabies a way to handle the stresses and frustrations life may throw at them. We also celebrate fun moments and quiet times at the beginning and end of each day to connect and re-connect.