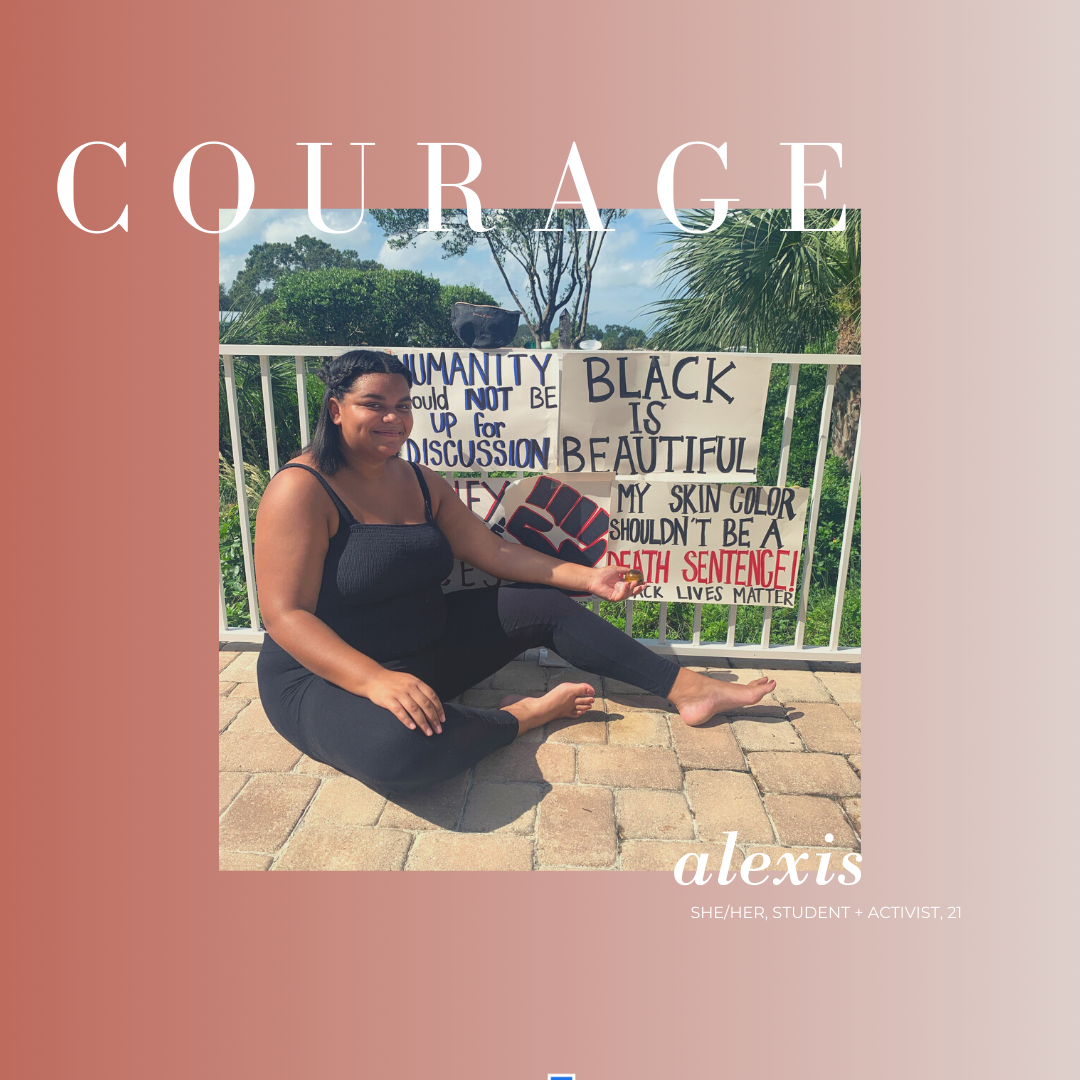 Profiles of Power is a series of deep dives into the lives of six individuals who we believe embody the energies of Courage, Love, Intuition, Purpose, Opportunity, and Calm. These badass ambassadors of a new version of spiritual wellness prove, beautifully and magically, that wellness is not one-size-fits-all, but is available and accessible to everybody who dares to harness their own one-of-a-kind strength.

On New Year’s Eve of her sophomore year of high school, Alexis Glasgow received news that no child should ever hear: her father had been killed by gun violence. Initially Alexis was despondent. “For the first few months I was at a loss in finding ways to cope. I distanced myself from friends and family and felt emotionally empty.” She was, understandably, feeling lost and scared.

In order to move forward, she summoned her power of Courage.

Step one? Getting out of her comfort zone and trying something that required her to be brave, namely honoring her father’s memory and becoming a community leader. “I spent the next several years volunteering and raising money for local organizations,” including spearheading with her sister an annual charity 5k.” Doing something that was difficult and succeeding made her realize that despite the tragedy in her life, she was incredibly strong.

It made her want to be even bolder.

Being bolder, as it turned out, came in the form of leaving Florida and moving to Washington D.C. to enroll at American University to study Justice & Law and Political Science. She knew nobody, but galvanized the Courage within her to persevere and find her purpose there. She became an advocate for better gun laws and worked for nonprofits and grassroots organizers, tapping into her experience and helping others who had dealt with similar struggles shine a light on their own reserve of Courage. “I committed to being a voice for the voiceless and inspiring others to find the courage within themselves to pursue their passions and live a life without any regrets.”

Nowhere is this more evident than in Alexis’s newest role, that of activist. Sidelined from campus by the pandemic in her childhood home in Florida, Alexis watched in horror as George Floyd was murdered by police. As a proud Black woman who had witnessed firsthand the racial inequity in our country and had enough, she sprang into action. She organized a series of protests, calls for community action, and forged meaningful relationships with the all white mayor, city leaders, and police chief of her hometown. The result has been a renewed dialogue around the topics of police reform and systemic racism in a town that is racially diverse yet ideologically quite divided. Her determination to tackle this issue despite the odds against her is Courage personified. “I realized that my voice is powerful. I want to inspire others to use the courage within themselves to amplify their voices and enforce tangible changes in our country.”

While her Courage has always existed within her, Alexis looks to her spiritual wellness practice to enhance her unique, one-of-a-kind, badass, unstoppable energy. “I have found that when you can find a spiritual connection to the world it is much easier to go through its tragedies with a positive outlook on how to successfully cope through it. I have crystals in all the purses I own and throughout my house. Their individual strengths help me to form a more well-rounded version of myself when I need the reminder. Understanding the cycle of grief, the power within yourself to shine through adversity, and maintaining your mental health through wellness has greatly helped me be the human I am today. Courage is only amplified through a positive mindset and the ability to lift up those around you on the way up.”

While the specific path ahead is not entirely yet paved for Alexis, who graduates from college next year, it is safe to say that she will be calling on her power of Courage to help her determine next steps. “Regardless of which glass ceiling I have to break, you know I will do the damn thannngggggg!!” We cannot wait to see what’s next for this brave wellness warrior.

Alexis can be found on Instagram @alexisglasgow. In addition to her obsession with Florida sunsets and Beyonce (SAME), she has a few fave Smudge Wellness picks, too: