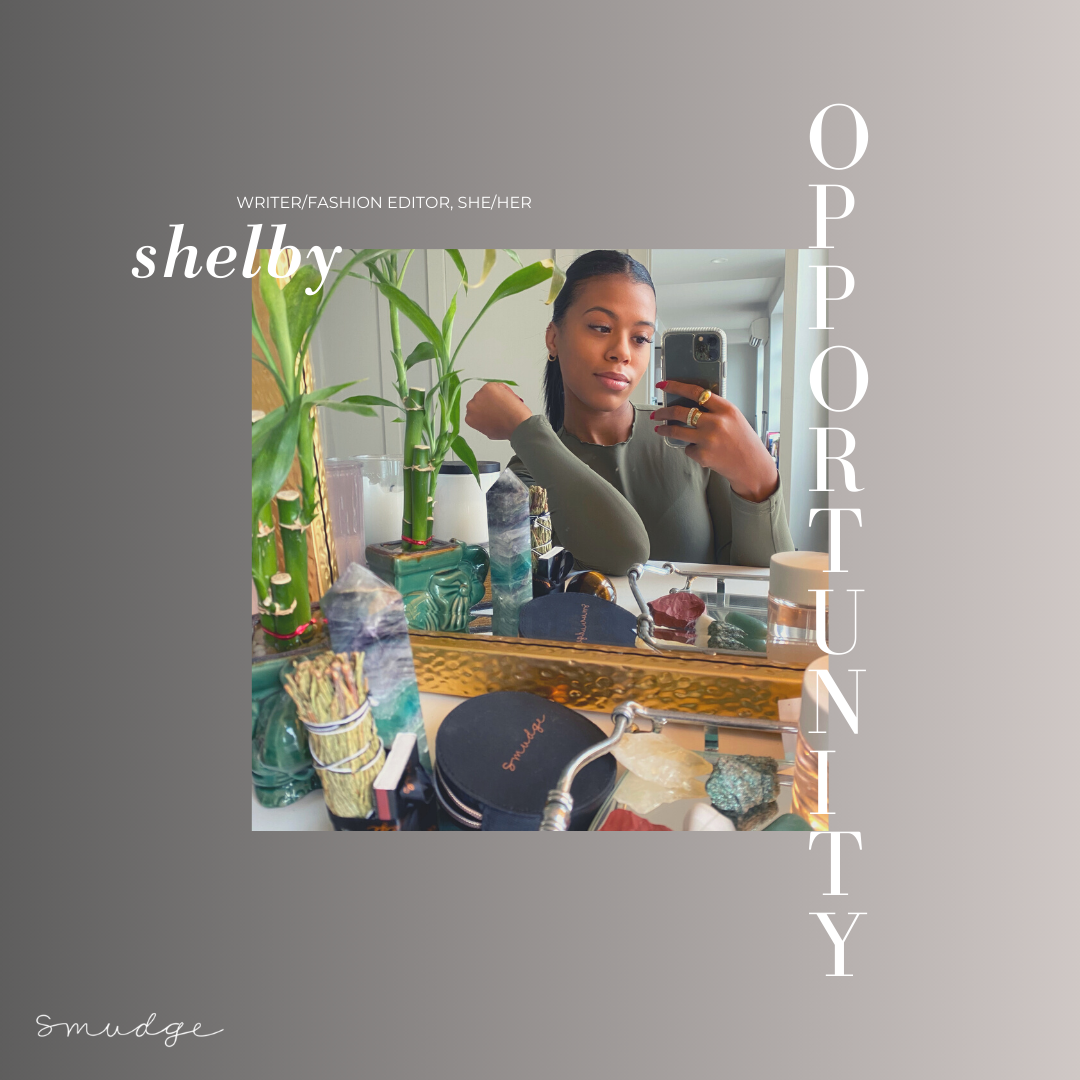 Profiles of Power is a series of deep dives into the lives of six individuals who we believe embody the energies of Courage, Love, Intuition, Purpose, Opportunity, and Calm. These badass ambassadors of a new version of spiritual wellness prove, beautifully and magically, that wellness is not one-size-fits-all, but is available and accessible to everybody who dares to harness their own one-of-a-kind strength.

Some people might look at Shelby Hyde and think, “that is one lucky human.” Living a dream life in New York, writing about shopping and pop culture for titles that include the Zoe Report, Harper’s Bazaar, and Teen Vogue — it’s the kind of career bliss that seems to exist only in whimsical romantic comedies. But listen to Shelby talk about how she ended up in this most enviable of positions and you realize that luck doesn’t have anything to do with it.

Shelby summoned the Power of Opportunity.

Far from simply falling into good fortune, Shelby has always had her eye on the prize. “I’ve manifested my entire life. I knew that I wanted to work in the fashion industry and live in New York City, as early as 5-years old and everything that I did from that moment on was done with intention.”

It is precisely this purpose-driven approach that is at the core of a philosophy that Team Smudge affectionately refers to as Getting Shit Done. It starts with the desire — and having the awareness to identify it as that — followed by the ability to translate that desire into an idea that then becomes a plan. From there? It’s all about action and making what started as a vision into a concrete reality.

“Growing up, I used to dream about doing what I love everyday,” Shelby recalls, a dream that she knew from an early age must necessarily include fashion and led to her “collecting some of the biggest fashion titles (like, Harper’s Bazaar and Teen Vogue)” and becoming immersed in the world she wanted to inhabit. A budding expert on her favorite subject, Shelby knew that the next step was to pair that knowledge with some serious writing skills, which she acquired with a journalism degree from Miami University in Ohio.

Armed with her degree and a knowledge of all things fashion, Shelby called on another critical ingredient of Opportunity: ambition. “As a Scorpio moon I’ve always had the drive and ambition to chase after my dreams, regardless of how big they may seem.” For Shelby, that meant listening to her gut even if more objective observers would have suggested becoming a New York fashion editor was something “that doesn’t just happen to a little Black girl from Indiana.”

Undettered by the odds, Shelby seized every chance she had to write and forge important connections within the New York writing community — eventually turning that childhood vision into her current position as a contributing editor to the very titles she worshipped and studied as a kid.

Along the way, spiritual wellness has been a formidable boost to Shelby’s ability to summon her Opportunity, enabling her to feel both grounded and out-of-this-world. “My spiritual wellness allows me to feel hopeful — especially with everything going on in the world, today. When I’ve absolutely done all that I can do in any situation, knowing that there’s a higher power at play is comforting. It makes you stop and remember that anything is possible, even if it’s not in your direct control.”

When she’s not spreading the gospel on the latest trends and red carpet looks, Shelby can be found absolutely slaying her own fashion and style on her Instagram @theshelbyying. (We spy a Smudge Wellness Rainbow Fluorite generating some serious creativity on her vanity…)

Team Smudge can’t get enough of this talented and gifted writer whose passion, grit, and grab-life-to-its fullest energy is Opportunity personified. Thankfully, we have a feeling that she is just getting started.

Looking to amplify your own power of Opportunity? Smudge Wellness suggests the following: